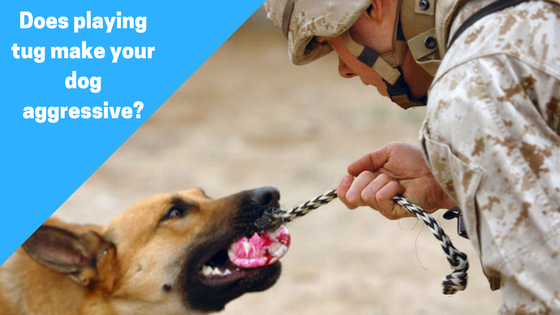 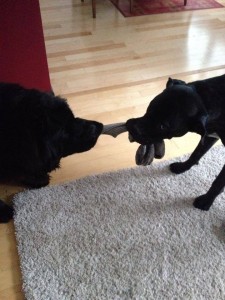 Some trainers warn against the dangers of playing tug of war with your dog. The belief is that it conditions a dog to react aggressively towards you, the owner and handler.

If you don’t know much about dogs and how they play this belief can make sense.

Why does tug scary the C#!P out of us.

Visually, dog play can often be loud and highly charged with some growling thrown in for added intimidation. This is because a dog displays many of the same behavioral patterns during play that are characteristic of aggression towards humans or other dogs. To the uninformed it can be scary stuff.

After all, have you ever seen a dog that thoroughly enjoys the game of tug? It’s not all pretty. There’s plenty of growling, forceful pulling, hard stares, and sometimes even lunging as they jump for the tug toy in your hands.

It’s enough to alarm and even terrorize many people. This is one way that we develop misconceptions about dog aggression.

The benefit of the game

Rest assured, if done right this game can be a great source of fun for your dog and yourself. It’s also a fantastic manner in which to strengthen the bond between yourself and your dog.

Because dogs learn through association, it won’t be long before your dog sees you as the source of good fun and an exciting activity.

Playing tug also allows your dog to expend his or her energy. It’s wonderful for providing both physical and mental stimulation.

Years of observation and research (yes, research has been conducted in order to determine whether dogs do become aggressive by playing tug) have proven that most dogs love playing tug. So much in fact, that some trainers use to reinforce/reward during training and agility exercises.

All that scary growling and body language you see in the dog is often an expression of how enthusiastically excited they are while playing tug.

Many dogs, once you choose to end the game, simply follow you around with the toy in their mouth hoping to entice you to continue the game. Be careful that you don’t allow this to become a means of gaining your attention. A good practice is to put the toy away once your done playing tug.

A second belief that makes many hesitant to play tug is the idea that a dog that is allowed to win at the game feels more dominant in his relationship with you and thus behaves in a more dominant manner. I’m going to call this one out as pure unadulterated idiocy.

It’s simple conjecture based on very outdated research and shaky assumptions. There is just no sound scientific research that arrives at this conclusion.

How to go about it

So if you now understand that it’s safe to play tug, how do you go about it the right way?

Here are a few pointers that will help you engage your dog in a safe and structured manner when playing.

1. It’s important to establish clear rules. In the heat of play your dog may exhibit some difficulty with self control. For example, the sight of the tug toy in your hand may drive the dog to attempt to snatch the toy from your hand in a fast and aggressive manner. In the process he may accidently catch your hand and fingers. It will hurt, and you’ll want to avoid that if at all possible.

Give your dog a clear message that play time is over when this happens. Do this by teaching a cue that indicates the start of play and another cue that teaches him when playtime is over.

You would also do well to teach your dog to “let go” of the toy on cue. It takes some work and practice but it will make the game much safer for you and establish some level of control over your dog.

2. Once play time is over remove the tug toy from the area and away from the reach of your dog. This establishes you as the one who holds and controls all the fun stuff and it also prevents him from hounding and pestering you to continue playing. Yes, some dogs enjoy it that much.

3. Tug is not a game for every dog. Some are too fearful to play, while others get too aroused and overstimulated so are unable to play safely. The dog that gets too excited and has trouble winding down from his high doesn’t need to continued practice at getting worked up.

Yet another bad candidate is the dog who has already demonstrated some level of aggression towards humans. If you have a dog that is not people friendly and has even growled at yourself or others you want to avoid playing tug with this dog.

You know your dog best so please use judgment to determine what is safe or not and what can intensify an already unstable situation. A good rule of thumb here, if you feel in any way apprehensive about playing this game with your dog, don’t. There are many other games you can enjoy together without stressing yourself or your dog out.

Here’s a neat little video for you to check out.

If you’re like me you’re always looking for new places to take your dog. Either…