Old habits die hard. This hugging and kissing ritual that we have with our dogs has no doubt been going on for decades, if not centuries. I’m just as certain that many have been deeply injured by their dogs as a consequence.

Before you get all upset because you’re dog puts up with your hugs and kisses, and you’re convinced that this is a trait inherent in all dogs, let me explain.

It is possible that a dog may very well be able to deal with our overzealous affections; it’s also possible that some dogs do enjoy it, but most don’t. At the very best, they tolerate it. And there is a world of difference between liking something and tolerating it.

We humans enjoy touch. We’re a touchy species. It’s one of the primary ways in which we convey feelings and establish connections with our fellow humans. When we meet another person we shake hands. It’s our way of establishing rapport and building alliances. Greeting this way also demonstrating our intent to interact in a friendly and non-threatening manner.

Even if you’re not the kind of person who enjoys hugs you’ll recognize that, in general, as a species, touch is a vital part of how we communicate. But you don’t see dogs hugging each other, do you? In many ways, our manner of contact between ourselves can appear threatening to the average dog.

In fact, normal interaction between two dogs meeting for the first time does not involve much touch, if any at all. There is no dog equivalent of the handshake, unless you count sniffing each others rears as such. Their normal meeting process can be described as more of a ritualized dance of glances, smells, and walks. Reasonably socialized dogs that do not exhibit anti-social or fearful tendencies first scope each other out before deciding to proceed with play or not. This is only after determining whether or not the other dog is safe. This process may take seconds or considerably longer.

Don’t pin them down

To a dog, the act of hugging can be unnerving. While to us hugging demonstrates clear signs of affection and warmth, to a dog this behavior can mean something entirely different. Dogs will not identify the meaning of a hug as we do. Even during the best scenario, a dog may be uncertain what to make of your hug.

Think about it, when hugging a person you wrap your arms around the other and hold them in place for a few seconds. That alone is bad news to a dog since they, on average, do not do well with restrain. They generally don’t like to be held in place. This alone is enough to generate feelings of anxiety, unease, and insecurity in your dog.

Let’s also consider proximity. Dogs are always trying to determine how something, or someone, fits into their space. A dog that is forced to be too close to someone will almost always choose to create distance. Close proximity creates stress within dogs. That’s not to say that they don’t enjoy the occasional snuggle and getting close to their people, but the very best way to do this is to allow them to do so on their terms.

Have a high energy, screaming toddler charge and embrace an already fearful dog and that dog can very well react in an unpleasant way since he’s being confronted with a stimulus overload that may not be easy to overcome.

I’ve seen kids, small ones, lean in to kiss a dog’s nose or face. Come on, if you’re not smart enough to understand how dangerous this can be if done to the wrong dog, or even the right dog in the wrong circumstances, then maybe you shouldn’t have a dog. Sound harsh and judgmental? Consider that most dogs bites occur to small children for the same or very similar reasons.

Children have difficulty with self control, restraining themselves, reading dog body language, and redirecting their actions. Teach your children well. So much has been written about kids and dogs, yet the message doesn’t appear to get through to those who need it the most.

Here are the key points you want to take from this…

Hugging can bring about panic and that can lead to momentary aggression. While this is something that can be easily avoided it continues to be allowed simply because we humans feel that a dog should be able to deal with a hug out of love, loyalty, respect, or just because. That’s selfishness and a lack of consideration for the dogs feelings and emotional state. 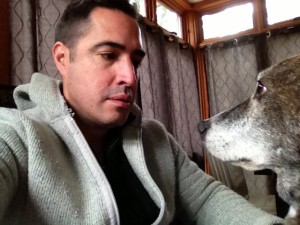 Here I discuss the importance of respecting personal space with Jackson.

Dogs are very conscience of their environment and the space around them. They are always trying to figure out how a person, item, animal, or sound fits into their space, whether that is your next door neighbor or a plastic bag on the floor. Permit them the option to move away from an uncomfortable person or situation.

Ill be honest with you…I hug and kiss my dogs. Does that make me a hypocrite? Maybe, but I think not. Either way, allow me to give you a few tips since I’m certain you’re going to continue to hug and kiss your dog anyway.

1. Make the contact safe and comfortable for your dog
I have had my dogs since puppyhood and throughout the years have slowly conditioned them to accept me at close proximity to their face and body. Getting them slowly accustomed to your touch, or better yet, getting them to associate your touch with good things like treats is the way to go.

2. Read your dogs body language
I’m keenly aware of their body language and states of mind. I use that information to guide me. I do not attempt to touch them when I sense they may be in the wrong mindset, such as at times when they may be frightened of something, overly aroused, or feeling physical discomfort.

3. Let your dog initiate contact
I typically hug them when they initiate some form of contact. For example, I could be sitting around and one dog may saddle up alongside me. In this scenario I may take the opportunity to gently place my arm around him or her. There are no jumps, no sudden movements on my part. Nor do I sneak up on them when they’re eating, sleeping, or at rest. And I NEVER allow children to go near them unsupervised.

4. Don’t force yourself on your dog
I don’t hug them in a manner that restrains them or locks them in place. I don’t demand that they sit there and take it, dismissing any bad feelings they may be having. When they want the contact to end they simply are permitted to walk away. All the while I check for signs of anxiety or stress. Very often there are none and the dogs remain by my side for extended periods of time. I also take it as a sign that they sit by my side quite often indicating to me that they are somewhat comfortable with our hugging and touching policy.

Through all this I am aware that they are simply tolerating my hugging and most likely not getting the same level of emotional charge that I am. And that’s ok with me.

Having said all that, I still suggest that you end the practice of hugging and kissing your dog. I’m going to try to follow my own advice. A hugged dog doesn’t mean a happy dog.

Where to take your dog in Saratoga Springs, NY

How your dog perceives the space around him (or her).

Why am I doing this?

Why start a blog? I have enough on my plate. Some days I feel overwhelmed…