A dog who barks and lunges at another dog or human is more than likely feeling fear than a need to protect you. 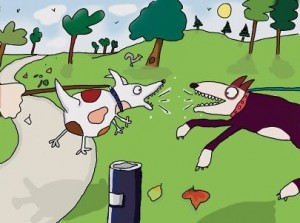 Of course, there are other variables to be considered, and it could very well be caused by something else entirely, but not likely. The fear, in most cases, often stems from a lack of socialization.

The dog is not familiar with the approaching person or dog and that creates insecurity within him. This insecurity, aka fear, makes him bark and/or lunge in an attempt to keep the object of fear at a distance.

If he could speak he may be saying, “Hey look at me. I’m mean and scary so you don’t want to come closer unless you want a piece of me.” It all mounts up to a bunch of smack talk in an effort to intimidate. Sometimes it works. When the other person or dog walks away, for whatever reason, the dog’s behavior is validated and reinforced and he now feels that this is the way to behave towards frightening things. In other words, his new motto becomes…Bark and lunge and the scary dog or human goes away.

We need to get our heads straight

It’s a popular notion to think that your dog is protecting you and looking out for you. Many people easily believe that when their dog barks and lunges it’s just protective behavior. We get all sorts of romantic ideas of our dog as body guard harking back to Lassie and Rin Tin Tin, when the truth is closer to Scooby Doo.

In actuality, your dog isn’t looking out for you, he’s looking out for himself and doing a suck ass job at it too. But this isn’t a sexy concept so it isn’t readily accepted. I get it. We prefer to live in a fantasy world where our dog should be all Disney-like most of the time but suddenly become Cujo when a threat is looming. Sorry to break it to you but, no, that’s not how it works. 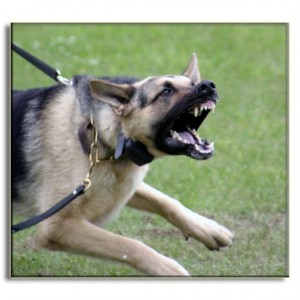 This isn’t as charming to your friends and neighbors as you may think.

Dogs can be taught to be “protective” but that learned behavior is reserved for military training, or law enforcement. Well, at least it should be.

The average owner doesn’t need a guard dog. Unless of course you feel threatened by the neighborhood kids, or the mail man, or just about any person who walks your way. Or you’re growing a crap load of weed on your property. If that sounds ridiculous, that’s because it is. You don’t need a dog to protect you.

You’re doing a disservice to the dog, and making it harder on yourself, when you fail to acknowledge and come to grips with this reality.

Dogs do not think like us. They do not possess our values, morals, and beliefs. There are areas of dog behavior in which you can find similarities between dogs and humans. Areas in which human psychology can be applied to your understanding of dogs…this is not one of them. A dog that has not been adequately socialized can, in many cases, have strong negative reactions to unfamiliar objects, people, environments, and situations due to fear. Period. By learning this one simple concept you’ll put yourself light years ahead of the majority of dog owners.

How not to get hurt by your dog

It’s not what you say or think, it’s what you do.

Many of us live through a vicious circle of denial. Denial about ourselves, others, and the…

Why does my dog drink out of the toilet?

Dogs are scavengers by nature. It’s a trait inherent in their genes and goes back…