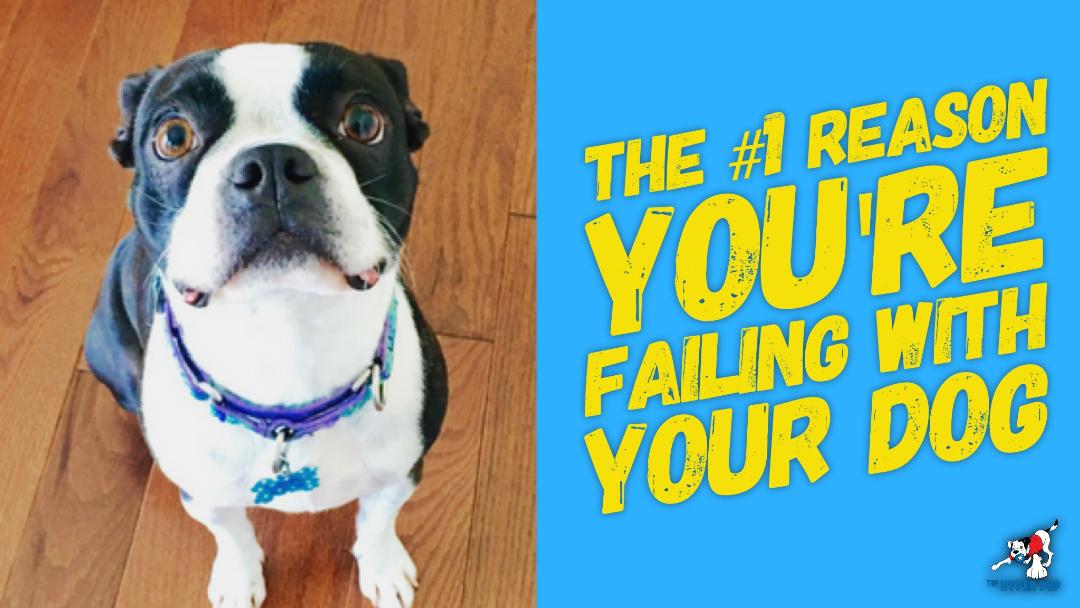 The longer I train dogs, the more selective I become about the people I choose to take on as clients. This pickiness doesn’t have much to do with the dogs issues or anything else relating to the dog.

It has everything to do with the owners, the humans in the dog’s life.

I call what I do dog training but it’s actually human training. Teaching one species to coexist with another that doesn’t speak their language.

I’ve learned that some folks struggle with the work.

Perhaps it’s because of the bias within humans which attributes behavioral problems almost entirely to the dog while at the same time denying their own influence, for better or worse, over the dog’s choices and actions.

Perhaps it’s the reality TV programs that have many dog owners buy into the idea that issues can be easily resolved within a matter of minutes.

Or perhaps it’s because some people are so damn lazy and inconsistent.

The reality is that most people don’t put enough work into their dog’s psychological and physiological development.

Hear me out…
When we teach a child the ABC’s we begin at the lowest possible level with one or two letters and gradually increase the difficulty when we feel the child can handle the additional information. We also continuously reinforce the new learning with high praise, stickers, and the occasional lollipop. This encourages the child to continue to learn and to do so with a positive attitude.

As the child develops in maturity and as their learning capability expands and strengthens we drill the new information onto the child until it become second nature. In the example of the ABC’s, we sing songs, provide them with coloring books, and encourage them to write the letters out in a fun and engaging manner.

All this takes time.

The same goes for practically any skill we wish to learn in life, whether it’s riding a bicycle, learning gymnastics, a new magic trick, or even how to drive a car. All of it takes continual practice and the more you practice the stronger the behavior or skill becomes.

The young driver who has only been on the road for two years will not have the same level of driving proficiency as the person who’s been driving for 20 years. Time and repetition makes us better.

But we tend to forget this when it comes to our dogs.

A perfect example is the sit command. Countless times I will ask new clients if their dog knows any obedience skills and countless times most of them answer with a resounding “yes”. They’re convinced that their dog knows exactly what they mean when they say “sit”. Maybe the dog sits four out of eight attempts. Or maybe the dogs sits after the owner repeats the cue 6 or 7 times.

That’s not what I would define as learned behavior.

What I’m saying is that the dog may have created an association with the cue so that he recognizes it when he hears it but that in no way indicates that the dog fully understands what he should do at any given time. In other words, the behavior or skill hasn’t become second nature.

More often than not it’s because the owners/leader/parent/handler has not committed to teaching the dog the behavior with any length of consistency. And that’s typically because, unlike a human child, we don’t view a dog’s learning/education as something requiring a long-term effort. We essentially see learning as a short-term effort that the dog should pick up on relatively quickly.

How do you get through life and achieve anything without patience and consistency?

The answer is you don’t. Not anything worth having, at least. You need to put in the time and effort with some degree of regularity. That means consistency; not just sometimes, not just when you feel like it, but all the time. The skills that you’re hoping to teach must become a lifestyle for yourself and the dog.

And through all of this effort you’ll need to wait it out. Because results aren’t going to come overnight. Results worth having can take a while before they’re seen or recognized. But rest assured, if you put in the work and demonstrate patience you will see results.

– Training should consist of very short sessions. Think seconds and not minutes. 30 – 45 seconds at a time is all you need to keep your dog engaged and still learning.

– Include many short sessions throughout the day. The cumulative effect on 2 dozen training sessions of 45 seconds in one day are amazing to see. Do this for a few days and you’ll have a dog that sees you as relevant and worthy of giving focused attention.

Where to take your dog in Saratoga Springs, NY

My dog is a poop eater.

My dog eats crap. And before you turn your nose up at me and my…

Read this only if you know me well…or would like to.

Monty, our older dog, is a chocolate lab. He’s up there in age and has…