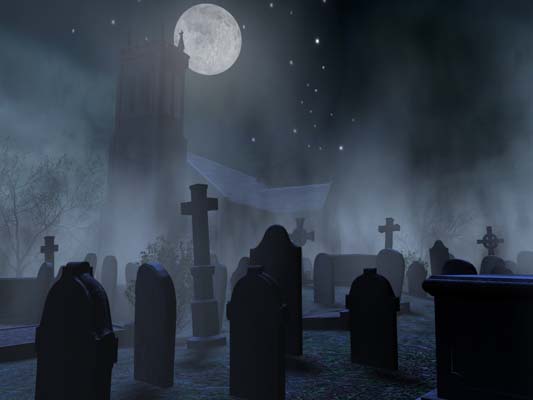 I drive pass a small and very old cemetery on my way home. They must have buried someone there long before there was a paved road. I have trouble making out the names on the tombstones. They’re the old sort of rocks. Just thin slabs with the names and dates of the dead chiseled on the front. Not like the modern day versions of thick granite for those who fancy a more fashionable style to their final hangout.

The cemetery lies next to a modern day dwelling just off a hilly spot on the road leading to my house. For years I didn’t know it was there since you really need to take it slow when driving by in order to see it. I’m usually flying past it and can seldom make out anyone, living or dead.

There are but a handful of graves and I’m sure that at one point some rural hick died, was buried there, and the rest of the family figured “What the heck, lets just all be buried there”; so it’s most likely a family. I know because I see them. Well, I saw one of them.

One night out of the blue, when the moon was so bright it illuminated the road, my curiosity got the better of me, as it often does, and I slowed down on the hilly road to gaze at the graves from the safety of my car. I’ve seen the place dozens of times in the daylight but that evening I thought it would be cool to see it at night. That’s when I saw him. He stared at me from behind one of the trees. This one bastard of a ghost who didn’t even have the decency to scare me at close range. His audacity to assume I was an easy mark.

So I continue my drive to the house, except this time much faster. Sinatra was singing some tune on my radio that seconds before had me snapping my fingers and singing along. Now I just needed to empty my bladder. I turned the radio off but that was a mistake. The silence completed my minds descent and it raced away, and not to a good place.

I couldn’t be certain but I was convinced the ghost was watching me from the back seat. I didn’t have the nerve to look in the rear view mirror. And do ghost even reflect? This was no time to find out. The back of my neck was itching and I scratch. Could it be the ghost messing with me? Cause that would be my luck, that I would be stalked by a prankster ghost. My hat was in the seat next to me so I reached over and placed it on my head. I may have read somewhere that the dead don’t like fedoras. This is no time to second guess the ridiculous. It gave me security and I’ll try anything at this point.

Once home I jump out of the car like the Dukes of Hazards, except I opened the door since there was no time to jump out the window. If there are huge man-bats hovering around, waiting to snatch me into the air, this would be the time. I wasn’t going to give them the satisfaction. If they would be so bold to snare me and wisk me away I would have no choice but to scream. Hell hath no fury like a Puerto Rican screaming.

I’ve heard howling on some nights and I’ve wondered if it’s a pack of demon dogs with eyes glowing like burning red embers, or it could be a werewolf roaming the neighborhood. Neither one could be good for my health so I race indoors.

Once inside I remember that I have a ghost in here too. Not your run of the mill ghost. This clown wants me to know he’s here. He makes his presence known to me and only me. No doors slamming, no bleeding walls, no ghostly apparitions staring down at me from above the stairway. Just a vague feeling that this shifty spirit is around and watching. This is how he likes it. He wants me guessing. Is he real or is he just part of my imaginings?

This is how I imagine Lulu, our young Pit bull mix, feels every day of her life. She’s a scared little girl constantly looking over her shoulders with a strong feeling of paranoia. Every sound, every sight brings apprehension and dread. Life is but a series of neurotic episodes for her. Of course, there really isn’t much of anything out there that will hurt her. It’s all in her mind. 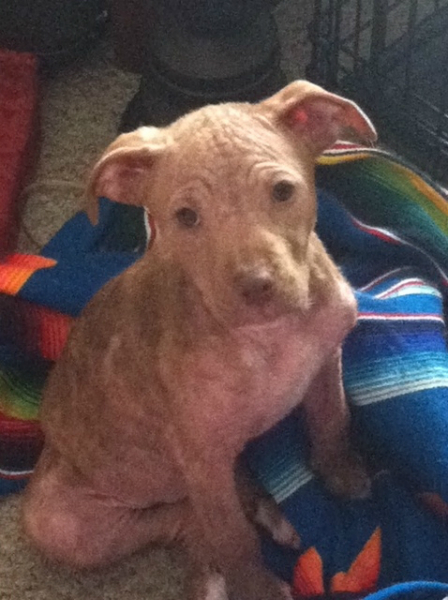 When she arrived at our house she was but a few months old and had a bad case of Mange. With so much of her beautiful brown coat having fallen off so that you saw only smooth skin and no hair she looked like a cross between a hairless cat and RuPaul. We were fostering her and we did the best we could at taking care of her. It was our job to ensure that she would be in the best of health by the time she was adopted. We crammed her with all the love we had and all the medication we were given. Like our other dog Macho, Lulu spent most of her socialization period holed up in the house unable to meet and greet the world. Her illness meant that she slept a lot, rarely played, and was at times weak and lethargic. We didn’t recognize the fear issues that would come to define her just yet.

Like most ardent dog lovers who lack any ability to reason we sucked at fostering, and soon after she arrived we decided that we would be keeping her. As her Mange improved she started coming out of her shell. Play with Macho was normal, if you can call anything having to do with Macho normal, and she took well to the children in the house. The cat was another matter. Although they would learn to coexist, the first few weeks were nothing more than Lulu pouncing on him in an attempt to play. Being the cat that he is he would have none of it. Instead of running off and hiding he would climb to the top of the couch where he knew he would be out of reach of Lulu, wait as she approached to smell him, and unleash a fury of bitch slaps to her face that resemble a session of Korean Parliment. It wasn’t pretty, but she learned.

We soon discovered that she was scared of everything imaginable. Skittish in her approaches she would walk from one side of the house to another with ears pulled back, tail tucked in, and head stooped low to the ground. On the times when Michelle or I would raise our voices – we have three girls so it’s a form of communication around here – Lulu would pee and cower. Loud noises of any kind, from inside the house or out, were enough to send her scrambling. She never ventures into the kitchen. The sounds of dishes, utensils, garbage can lids, and everything else proved too much.

We both treat her gently with kindness, much love, and affection and are ever mindful of how she views the world. She gets an overwhelming amount of love from us and the children. Still, when she approaches us, and she does frequently, she does so with trepidation and an uneasiness that borders on frantic. It’s funny and sad to watch. Sitting on the couch while watching television I’ll notice her slinking near my leg in an attempt to win the warm spot next to me. With ears pulled back and a frown on her brow she places her two front paws on my legs, leans in close, and cuts loose a series of wild and frenzied tongue slaps to my face that leave me disoriented and drowning in dog spit. This is the only way she will get close to anyone. It’s her defense mechanism and how she deals with her nerves and apprehension. 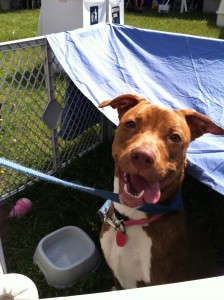 Her fear is part of everyday life for us now. We learn to deal with it and navigate around her issues. More so, we’ve learned to understand this insecurity. We have a great deal of love for her and that’s an extremely significant factor in the treatment of a fearful dog – empathy and compassion. Techniques and handling skills are important but the ability to put your dog at ease through presence and energy are qualities that cannot be taught yet greatly contribute to a more tolerable life.

With one senior dog, another who displays strong dominance and lacks social skills, and now one who is overly fearful, we have plenty to work on.

When I leave my dog alone in the house, he eats my shoes and gets into the garbage. Is he doing this out of spite or is he trying to get even with me for leaving him behind?

Neither. There are a few reasons why this could be happening and none have anything…

Teaching your dog to “Leave it”.