And before you turn your nose up at me and my pooch and think that your dog is so much better because he doesn’t do the same let me set you straight, he does. You just haven’t caught him doing it. Or maybe he did it for a time and dropped the habit, but believe me that chances are that at one time or other your lovable little pooch was munching on a turd patty. 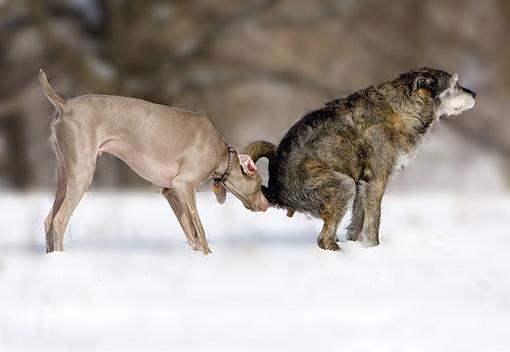 It’s called Coprophagia and it’s actually quite common among dogs and other animals.

The truth is that there are supposedly a variety of reasons as to why a dog may do this and they range from a nutrient deficiency to just simply liking the taste. That’s right; some dogs get off on eating the brown candy.

This is all speculation of sorts since no one truly knows the reasons why a dog chooses to take up this culinary habit.

Another truth is that it doesn’t appear to be particularly dangerous to dogs, although it’s disturbing and beyond disgusting to us humans thus the reason why we get so bent out of shape when we see a dog do it.

Here’s a third truth. Most dogs get past this phase, if you can call it that, and eat poop for a very short time.

I imagine that this fixation on poop eating goes way back. Do you think that early man caught sight of dogs eating crap and thought of it as something worth trying? If our ancestors were anything like our modern day man I have to say yes. Monkey see, monkey do. It would have been all the craze. These early men, or what I scientifically refer to as “Boneheads”, would have wanted in on the action.

The Greeks would have put an end to that though. They were more cultivated and perhaps more refined. But the Romans would have engorged themselves on it 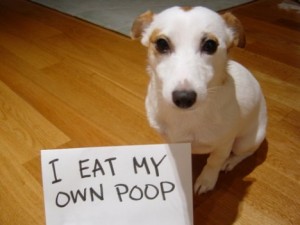 Not my dog. But if he could write…

Of course, it didn’t catch on. And that’s a good thing. If it had, we could all very well be chomping down on poop pate. Might even be served in the finest of restaurants. I could see the French going for that kind of stuff. But who am I kidding, Americans are just as stupid. We’d be buying it by the bucket full at WalMart.

So don’t get too disturbed when you find your dog snacking on a poopcicle. You’ll want to do what you can about discouraging him. Without hurting the guy or girl. You know how I feel about hurting your dog. Don’t do it. Help him realize that there are better things in life. Luckily it won’t kill him, or it shouldn’t. He can, however, get worms or any disease brought on by feasting on the poop of a sick dog.

Take a look at this link from the ASPCA.

On their site you’ll be able to get more in-depth information about Coprophagia as well as tips and suggestions on how to prevent it from happening with your dog.

And as for you, make sure you don’t step on it. Like I have.

10 BS facts about Dog Aggression (many people think are true)

Get your dog to focus by teaching “Touch”

Touch is a simple cue. On the surface it doesn’t look like much. Because of…