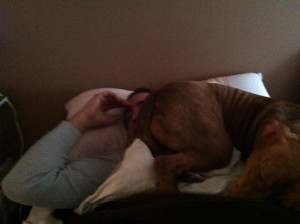 Here I successfully teach Lulu the proper and respectful way of laying on the bed.

I know you’ve done it. If you haven’t then you’ve thought about it and maybe you’ve been tempted to try. Maybe you’ve heard of others who are doing it.

I’m talking about letting your dog sleep on your bed. To some people this may sound gross. Not me. That’s right, I do it. I’ve allowed my dogs, well one of them, to slip in under the sheets with me. Want to know what’s worse? Well for starters I’m a trainer so for practical purposes I advice those clients just starting out on their life journey with a dog not to do it. I don’t follow my own advice.

So how did I end up joining the ranks of those who snuggle with their doggies in bed?

The puppies made me do it.

I’m a sucker for puppies so any puppy in our house would have immediately found his or her way to our bed. The cuteness factor, puppy breath, extended belly, and waggy tail all contribute towards my eventually giving in and my downfall. We fostered dogs for some time.  This means there were a lot of puppies in our lives at first.

I swore that I would not allow any grown, adult dogs onto our bed. That wouldn’t be acceptable. Puppies were a different matter. Then one time during a moment of weakness we became foster failures. That’s when you foster a dog, care for her for weeks or months, play with the dog, bond with the dog, and when it’s time for her to go on to a “forever home” with a loving family, you refuse to let go and adopt her yourself. That’s a foster failure. And that’s how we ended up with three dogs.

So that little puppy, who for weeks had been accustomed to sleeping on the bed at night because we didn’t anticipate she would be sticking around, came to expect it every night. I tried to be strong and get her to sleep on the floor. I tried to be tough and shoo her away when she came pleading at the side of the bed with her big, sad, adorable, soulful eyes. But I clearly was not very effective or convincing. Truth be told, I didn’t put much effort into dissuading her. Plus Saratoga is damn cold in the winter and a dog will certainly warm you up. For a time everything was good in the world. For a time.

One of the problems is that they don’t remain puppies for long. Soon this tiny 12lb innocent pup had morphed into a 56lb Prima Donna who felt no compulsion and little hesitation about climbing up on the bed without an invitation. Gone were the days when she would curl up into a little ball of fur and tuck herself under my arm. Here were the days when she splayed out on her back like a drunken sailor, belly up, legs open, eyes closed, tongue out, and taking up half the bed in the process. Oh, did I mention she snored?

Now if this story, which is true, hasn’t taught you a few lessons about sleeping with your dog let me break it down for you. First, let me state opening that I see no trouble with your dog sleeping in your bed. I advice clients against it because, in the case that a problem should arise, most people are not prepared for the emotional toll it can take on them nor do they understand how to remedy the situation.

Drawbacks to this Master Plan

Aside from the problem already mentioned in which small dogs grow into big dogs, a primary issue with allowing dogs to sleep on your bed is that some dogs become territorial. They get protective about a favorite area or guard their space. If the space they guard is your bed, you now have a problem. Worse yet, some dogs guard one particular parent over another making it difficult, if not impossible, for both partners to be on the bed with the dog.

This one issue can arise when owners do not set clear and consistent limits with their dogs. Also, the guarding which started with the bed may extend to other areas of the house.

Of course this isn’t true of every dog and it’s certainly true that you can live peacefully with your dog on your bed. We do.  I recommend that you seek the help of a Positive Professional Trainer should you feel you’re in over your head.

We have three dogs but Lulu is the only one allowed on the bed. Why? First, she’s the smallest. Second, she has her issue with anxiety and fears and being on the bed with us is a source of comfort for her. Third, we have taught her to remove herself from the bed when told to do so.

The other two dogs are never allowed on the bed. They understand this rule and rarely attempt to break it. This may seem unfair to some of you, and perhaps it is, but this is what I mean about rules and limits.

Just like with a child, a healthy relationship with our dogs is one in which they understand that there are limits to what they are allowed to do. This ties in directly to your expectations as a dog parent. A consequence of lacking clear expectations and standards for behavior is that the child or dog makes up the rules on their own. This usually happens as they go along and rarely is it anything that works out well for all involved.

Some quick tips / the takeaway:

– Never relinquish your leadership. This isn’t about dominance. It’s about the guidance you provide.

– Have clear, well thought-out expectations for behavior. This goes for indoors and outside the house.

– Set limits on what is allowed. No one act defines a dog as out of control. It’s a combination of unruly, misguided actions and behaviors that reveal the lack of a leader or limits.

15 hard and fast tips every dog owner should know and follow, but most don’t. (Updated)