Someone once told me that dogs are natures greatest manipulators. I wish I could remember who that was.

It doesn’t matter because the message is 100% on point with this article. And I agree with it.

Hear me out. We all know that certain dogs can be pushy and demanding. They bark, stare us down, throw a paw up, whine, and literally get in our faces. All in the pursuit for attention. And in many cases, they’re incredibly insistent and unrelenting in their attempts. 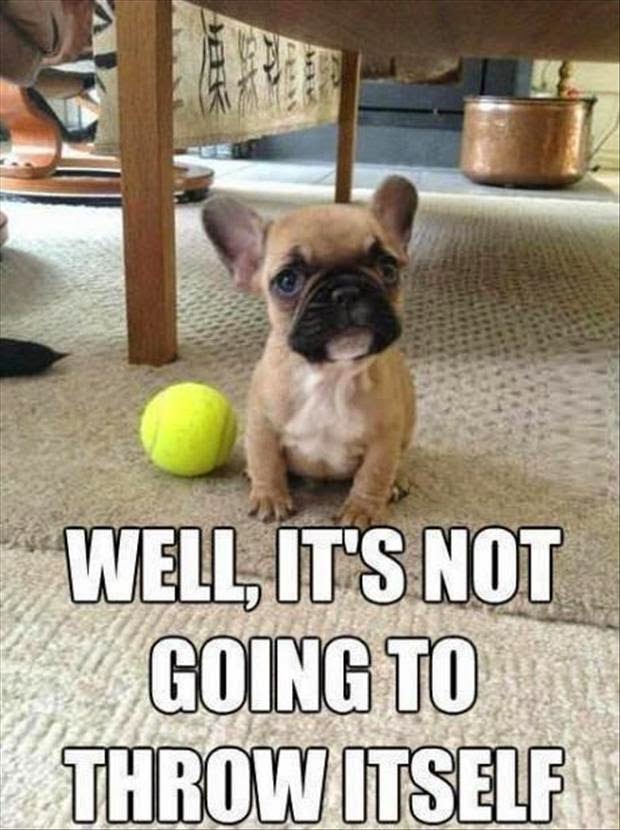 In their defense, this insistent behavior usually comes about because we’ve somehow trained it into them. Yes, you read that right.

Often enough our unruly or bad mannered dog is a direct result of actions we’ve taken, or have neglected to take. In other words, behavior we’ve either created or enabled in some sense.

What does this mean?

Again and again, behavior that is considered annoying, even if just slightly, goes unchecked and over time becomes worse. In scientific speak, a behavior that is allowed to continue grows stronger.

Many of these behaviors are self-reinforcing, meaning that the activity or the outcome is rewarding. So what may have been something easily avoidable at the beginning becomes deeply ingrained over time.  It now is a strong part of the dogs ongoing repertoire of activities.

Ever walk past the same house and each time have the family dog bark incessantly at you? Bet you he barks that way at everyone and everything that passes the house. That’s because, while that family is away at work or school, that dog has been practicing the same behavior repeatedly, often non-stop. Over time the repetition conditions a well rehearsed skill that is difficult to stop.

So how do you deal with a pushy, bossy, or demanding dog? 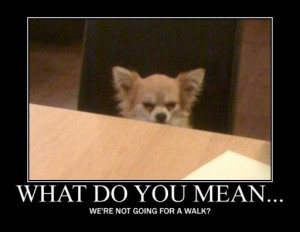 Right now you’re thinking this is the most ridiculous dog training advice you’ve read on the internet, but hang in there and hear me out.

Ignoring an unwanted behavior WILL make it stop over time.

This is called extinction in the dog training world. The caveat here is that it may take a very long time before your dog makes the connection and you’ll need to exercise a great deal of patience in the meantime.

How does it work?

Ever have someone turn their back on you during a conversation or argument?

Doesn’t feel good, does it?

It may actually make you angry and defensive.

Thankfully dogs aren’t exactly like humans in this way. They won’t take personal offense and want to get into a fight over it but they’ll certainly get the message that you’re attempting to disengage from them. Since the behavior goes unrewarded the dog eventually arrives at the realization that doing the behavior isn’t worth it since it gets him nowhere. It’s simple associative learning, and this is the primary way dogs learn. Through association and consequences. Negative or positive consequences.

The Secret is in the details (and in your effort)

Say Poochie is barking at you for attention (again, if he’s doing it regularly it’s because he’s most likely learned that it sometimes gets results), maybe he wants you to rub or pet him, or play with him, or you’re cooking and he wants a treat from the kitchen.

Turn away from him.

Don’t make eye contact and don’t talk to him. When he moves to face you once more, as he will most likely do, turn away from him again. Refuse to acknowledge him and give in to his tantrums.

What you’re actually doing is providing the dog with a different consequence to the same behavior. It’s a consequence he won’t like since the dog has by now been so accustomed to getting what he wants. In essence, you’re removing the reward for his demanding actions.

If you are faithful to this approach (and by that I mean 100% consistent) then the dog will begin to form a new association. And that association is that the activity is no longer worth his efforts because it is no longer reinforced.

What more can you do?

Replace the aggravating behavior with an activity which you deem acceptable. For example, once he has barked his fool head off trying to get your attention, and only after he has calmed down, guide him to a comfortable spot (think a warm blanket or bed) and reward him for that. Cue this by naming it “Place” and reinforcing it with a food reward. The catch is that he only gets the reward while on his bed.

Initially, ignoring your dog will frustrate him – but that’s the point.  It will also teach him that bossy and demanding behaviors will get him nothing from you. 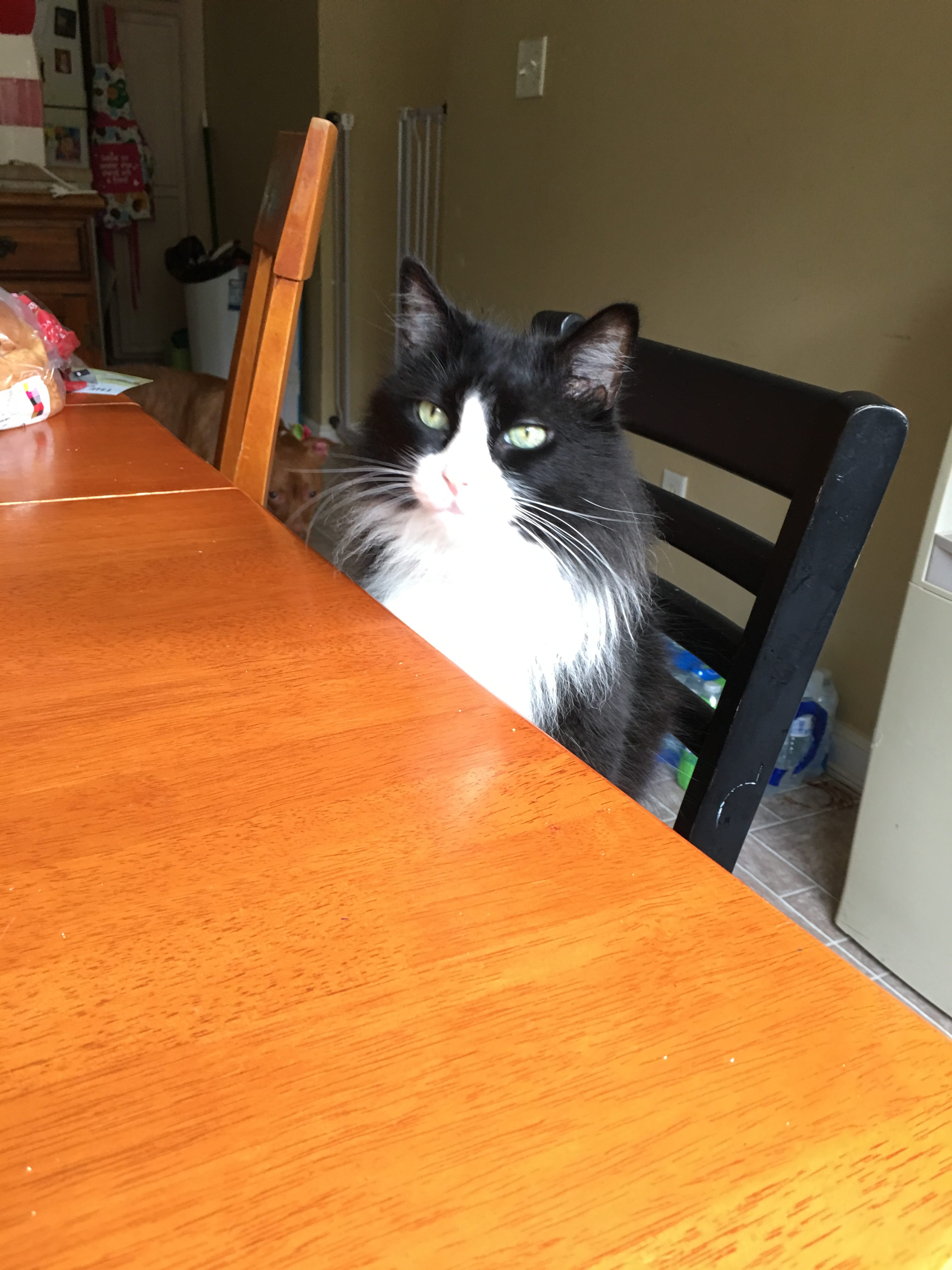 Cats can be pushy, demanding bastards too.

A few tips about this approach…

– To be successful at this, and anything else for that matter, you must be consistent. Don’t apply this technique once in a while or only when you’re in the mood but every single time he exhibits demanding behavior.

– That means that you do not give in. Under any circumstances. Stand your ground. Be strong, but calm. Dog behavior doesn’t change overnight. You participated in the creation of this mess so now you have to put the work in to undo it.

– Remember that simply looking down at him and asking him to be quiet is all the reinforcement he may need. He’s gotten your attention and that’s good enough for him. Don’t do it. Ignore him.

– Don’t stare at him thinking you’ll intimidate him into stopping his obnoxious behavior. In the best case scenario he’ll just feel he’s gotten your attention and he wins again (see how tricky and sly he is?). In the worse case, he’ll perceive your hard stare as a threat. Not good.

Before you go, watch how these dogs find their marks (pigeons) and make suckers out of them.

Also, check out my podcast on this page. It’s filled with more educational stuff for you and your dog. Subscribe and review.