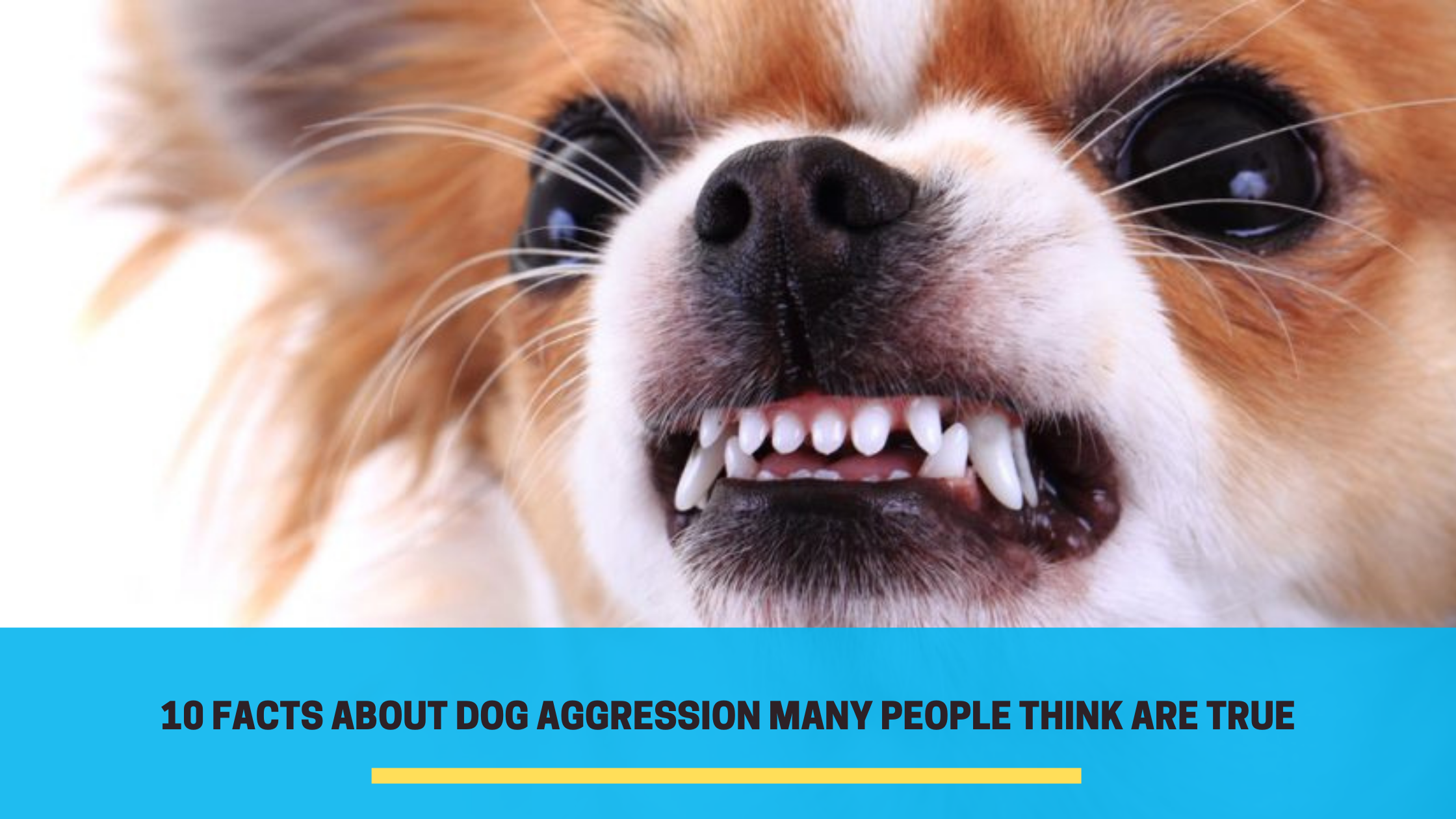 I love what I do.

I educate humans in order to help those that cannot speak up for themselves.

Being an intermediary, I serve in part as translator between one species and another. You’d think most of my job involves the actual mechanics of training a dog, it doesn’t.

The most repetitive part of the job is correcting misinformation and hardened biases that calcify in the minds of humans. It’s human training.

It’s a tricky subject for many to wrap their heads around. 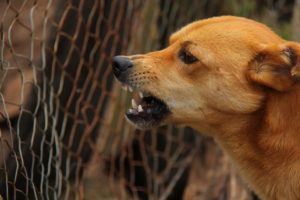 There’s something about the topic that triggers our fear response.

The words “dog aggression” alone beget a primal need to run away from the killer dog and seek safe grounds .

When fear is the trigger, most rational thinking goes out the window.

Interpreting truth from myths is necessary when dealing with a topic as disquieting as dog aggression.

When you buy into any idea or interpretation lock, stock, and barrel without examination into its validity you essentially accept it as blind truth and live that truth; no matter how ill informed it may be.

What is Dog Aggression?

Let’s focus on aggression as being expressed through barking, growling, lunging, snarling, air snapping, showing teeth (along with a growl), or a combination of all of these.

Some trainers and behaviorist will say that a dog is not aggressive until he or she actually makes contact with skin and bites. I disagree.

A dog doesn’t need to progress to a full blown bite or attack for clear displays of aggressive intent and warnings to be present.

When would you consider the point at which a person is aggressing towards you? When they’re hurling threats and waving their fists, or when they’ve punched you in the face? I’d say the fist waving and threats are aggressive actions.

Putting it all in Perspective
Dogs are associative in the way they learn.

They pair one thing (dog, person, action, environment, sound, smell, etc.) with another and they can easily form an association that will last their lifetime. 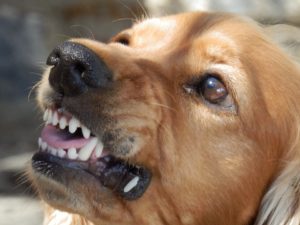 They have trouble contextualizing. It’s not uncommon for a dog to have a negative encounter with one dog and generalize the association created during that encounter with every other dog.

In this example, a dog may learn that defensive actions (barking, lunging, growling, etc.)  work at keeping other dogs away, or at a safe distance. This reinforces the aggressive behaviors.

In other words, the dog has jumped from one association to another.

Bad encounter with a dog = negative association (created by the bad encounter) = dogs are scary.

Barks and lunges at other dogs = other dogs keep a distance (reinforcing) = Positive association towards his own aggressive actions.

Disclosure
P.S. I considered adding links to online articles and statistics as a means of providing references and backing up an opinion. What I discovered is an amazing amount of discrepancies and inconsistencies. Lists of breeds that have behaved the most aggressively vary greatly. And I mean GREATLY. Statistics are skewed and often spun to represent and validate the author’s individual biases. For every article I found in support of an argument I would find another against it.

I concluded that these statistics should not be taken at face value. Therefore the real benefits to the numbers only come when you place those findings under a critical microscope. For those reasons I leave it up to the reader to conduct his or her own research.

What’s most important is that you arrive at a deeper understanding through your own process of research, experience, and critical thinking on the subject.

Having said that, I have provided links to a few articles that I think you’ll benefit from.

Here are 10 Dog Aggression Facts many people buy into

Dominance isn’t a thing, so let’s get over this. At least it’s not a thing in the way you think it is.

The theory is that, with Machiavellian ambitions, a dog’s primary intent is establishing a foothold in your life so that he or she can climb a hierarchical ladder and prove him or herself top dog, literally.

It’s meant to sound as ridiculous as that.

Those who buy into this idea have convinced themselves that a dog’s deep-seated aspirations will drive it to make numerous attempts at usurping your power and authority.

As if the dogs genetic makeup is primarily designed to establish itself as the leader.

Hide your wife, hide your kids.

People who assume dominance in dogs are distressingly misguided.

Hear what Alexandra Horowitz has to say about this. Yeah, I agree with her.

Strong emotions are never random. They’re not accidental and nor are they arbitrary actions. They always stem from somewhere and the expression of these emotions are based on specific triggers. When we fail to understand this concept we embody the dog with sinister intent.

A human can deviously plot your demise while simultaneously telling you how much he loves you. This doesn’t happen with dogs.

Dogs are incapable of lying.

Humans can also hold on to anger for an extended period of time, years even. That anger festers and manifest in an aggressive and violent display weeks or decades down the road.

Dogs largely react in the moment.

Dog aggression at its core is a conditioned response based on a negative association. There are no conspiratorial machinations in the dogs head and no premeditated thoughts.

There’s ALWAYS a SPECIFIC reason for the behavior.

In fact, if you know your dog and can read his body language his behavior, including aggression, is anything but random – it becomes highly predictable.

One common phrase I hear from owners who call me when a bite occurs, “It just happened out of the blue”. That’s some BS right there. It never comes out of the blue.

Aggressive behaviors generally stop when the trigger is removed. That’s because the dog’s emotional and mental frame of mind shifts once the fear stimulus is no longer within proximity.

A dog that reacts aggressively in one context will often be highly social, friendly, and approachable in another.

The point is that if aggression rears it’s head in one situation it doesn’t mean that it will do so in another.

Because dogs link their behavior to specific triggers, in many cases, it’s possible to manipulate access to those triggers in such a way as to minimize the aggressive outburst or even end it entirely.

Obedience training can certainly help establish a clear leader and give that leader a much needed boost of confidence over an otherwise unruly or out-of-control dog.

It can hold the dog accountable for certain behaviors while providing the human with a higher level of control and manageability over an otherwise out-of-control dog or living situation.

However, it MAY NOT be a cure for aggression.

While it can, with proper conditioning, help minimize the effects of the original trigger(s) (association) in the dog’s mind, and thus his choices in behaviors, this is not always the case.

A dog whose initial fear/stress reaction is so deeply ingrained isn’t going to automatically and willfully give up on that fearful Pavlovian response simply because of obedience training.

It can certainly help, but it’s not a guaranteed cure.

Yet, obedience training has it’s place and value if just to give the human a sense of control.

5. Neutering your dog will stop the aggression
This one can vary depending on which veterinarian you ask but there is no correlation between neutering and decreased aggressive tendencies in dogs.

The consensus appears to be that neutering will not necessarily prevent dog aggression since dogs chose to aggress for a variety of reasons.

There’s also no valid argument which clearly show that these incidents are related to a surge of testosterone.

A dog’s genetics, environment, human handlers, state of mind, emotional makeup, and temperament all largely determine if aggression will present itself at some point.

6. It’s best to punish a growling dog in order to prevent aggression
A growl is a warning.

Why would you want to turn off the warning sirens when it may be the only notice of your dogs intent?

Punishing the growling is only going to make the dog turn the alarm off.

It won’t hold back the tidal wave of fear, frustration, anxiety, and stress that compelled the dog to growl in the first place.

I like warnings. Growls, to me, are indicators of a dogs stress levels.

7. Once a dog bites he will continue to do so

This is the same argument as “once aggressive, always aggressive”, but some humans like to rephrase a question and milk a controversy when they don’t find satisfaction in an answer.

Dog’s don’t bite out of the blue and this article in Psychology Today will help clarify this concept.

8. Aggressive dogs are born that way

It is true that a dog can be born with a predisposition towards assertive and aggressive behaviors, the vast majority are not.

These extremely rare dogs begin displaying this predilection often on in puppyhood.

Dogs that are born with this temperament may suffer from a mentally defect. Aggression, in their case, isn’t brought on by a specific trigger or stress level. It’s just that the dog feels that the best way to navigate through life is with aggression.

A young pup showing signs of dog aggression is typically weaned out of the system early.

A healthy dog, and most all are, do not feel the need to express themselves in an aggressive or overly assertive manner.

The average dog, regardless of his or her current baggage, isn’t born aggressive.

9. Only certain breeds are aggressive

Those buying into this idea are victims of the mass hysteria brought on by negative stereotyping of specific breeds.

These days it’s Pitbulls, or any dog that resembles a Pitbull.

Every dog, regardless of breed, has the potential for aggression. The dog you think is the most likely to “turn” aggressive, may not. The dog considered to be the ideal family friendly kind might be the most prone to bite.

Again, there are so many ways to twist the statistics on this. The variables play a major role in understanding the reasons behind the numbers. But it’s clear that dog aggression is not a product of breed design.

This video speaks on this myth.

Nipping is a natural behavior in young dogs.

Teeth on skin as a result of playfulness, high energy, or over-excitement is a far cry from a dog whose intent is to harm.